Let's just come out and say it. We were thrilled to partner with MD Anderson on what, to our knowledge, is the largest Epic big bang go-live ever. Shortly after go-live, we managed to catch up with MD Anderson CIO Chris Belmont and get some of his thoughts on what made this go-live so successful.

Chris talks about the decision to move from best-of-breed solutions to Epic's integrated system and what the partnership between MD Anderson and Epic is like. He also goes into some early results, including high-volume procedural areas that were able to decrease wait times to below pre-live baselines by the fourth day of go-live.

Of course, we did ask Chris about the relationship with Nordic. He had some nice words about the partnership, and we certainly agree on the benefits of that partner-driven approach.

"Nordic was one of the most productive, efficient, and valuable resources we had ... you couldn't tell that they were from the outside, which is the perfect scenario, because we always felt that they were engaged with MD Anderson."
- CIO Chris Belmont

Chris is very upfront about the stage of the journey they are on. "This is just the beginning," Chris comments early on in the video. He then discusses the role of optimization, which he defines as simply "How do you take the tool and make the organization better?"

What does that look like moving forward? Stay tuned. Enjoy the video! (Transcript is below the video.)

In the meantime, if you'd like to discuss any ideas related to implementation leadership, please drop us a line.

My name is Chris Belmont. I'm the VP and CIO here at MD Anderson Cancer Center in Houston, Texas. I arrived at MD Anderson about two and a half years ago. At that point, MD Anderson had made the decision to move off of the homegrown electronic medical records system they had, which was not only homegrown ambulatory EMR, but it was a hodgepodge or collection of other best-of-breed solutions, like most organizations have. They decided that, you know, our motto here is to make cancer history, and what we decided was our goal wasn't to make software history. The idea of "Let's focus on our core competency,” go with a proven platform that would provide the services that we needed throughout the institution, in a very integrated fashion, that allowed our caregivers and our cancer fighters to focus on what they do best and make them more efficient.

About that time, MD Anderson selected Epic as the electronic medical record, or as we call it here, the electronic healthcare health record of choice. We were very selective in our partners and probably more importantly, the actual consultants that engage with us. Our goal was to keep our use of consultants below 10 percent, not for budget purposes, but because we felt that we needed to own this project going forward. As much knowledge transfer is desired, it just doesn't happen as easy as if you own it yourself. We engaged with several organizations. Nordic was one of the most productive and efficient and valuable resources we had. They came in very quickly. I remember my first exposure to a couple of them. I had to ask was that us or them because you couldn't tell that they were from the outside, which is the perfect scenario because we always felt that they were engaged with MD Anderson, and to the benefit of the project, but also the institution. It was very gratifying to see them kind of gravitate to the mission, just like we have, as we do every day as employees. 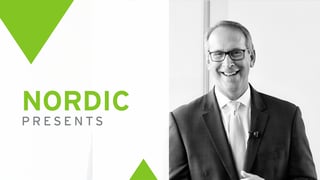 I think that the preparation that went into the project, led by Nordic and validated by Nordic, our activation team in particular, really helped us, kind of dodge a couple of what could have been significant interruption bullets. For example, I think it was on day two, we had a power outage in our main data center, and because we had practiced and rehearsed and tested our fail over plan, I think four or five times, it was seamless. Our users didn't even know that one data center lost power and we failed over to our second data center.

We did a technology review, the reconciliation and the conversions. Migrating that number of appointments and reconciling that was just amazing, and, again, a success factor that could have easily gone the wrong way. Not only would it have impacted the go-live, but the efficiency of our ability to see patients. Then when we turned it on, we noticed there were things like wait times that were going up. We swarmed around that, in one of our chemotherapy areas, in particular. We swarmed around that, brought some best practices, stood up a second command center just for that ambulatory treatment center. We were able to drive our wait times down. On our third or fourth day of go-live, our normal wait times were averaging 90 minutes, (but) we were actually seeing 70 minute wait times. Our wait times actually went down after we implemented some of the changes, and again, supported by our partners.

In a project like this, you want to say that the go-live event is, you might want to think it's the end. Actually it's the beginning. If we were to stop right where we are today, all we would have done is replaced our legacy environment. Now what we have is a tool that we can build on. The integration is invaluable, and the fact that if something happens to a patient in registration, you immediately see it on the clinical side. The integration is a fantastic feature of the system.

Now we have the opportunity to take it to the next level. There are still some features we haven't implemented, like a lot of the mobile applications, a lot of the self-service check in features. But then, we also have the opportunity to optimize some of the processes that we didn't get around to or that we elected not to do because we didn't want to put too much change into the institution at all. We're about one month into the go-live. In about another 45 days we'll heavily kick off an optimization process. We're already collecting and prioritizing where do we want to optimize. Optimization is a little bit of a, in my opinion, a little bit of a tired word, but it's basically, how do you take the tool, and make the organization better? It's not just the features and functions, but it's also the processes that happen on the back end.

One of the great features that we have, and I think one of the great successes we've had to date, is our ability to get good information almost in real time. A lot of the decisions, a lot of the issues that have arisen, we're able to back that up with data. We're able to look in real time, OK. What is the effect of this change? Or if we found an issue, how big is the issue? Well, we were able to look in real time, and I remember in a meeting, just last week, originally we thought we had an issue with 45,000 accounts, and we quickly were able, through the analytics process, whittling it down to say, OK, it's really only affecting about 3,000, and from there we could focus on the three thousand, instead of saying, OK, we've got a massive issue. Having that ability and transparency of data, and having access to such rich information is going to be critical.

Epic will come out with updates every year, with new features and functionality. They absolutely have learned from us on the Beacon side, since we're the largest stand-alone cancer center in the nation, and probably the world. They will always be working with us to improve Beacon, along with several other modules along the way. We have a great partner in Epic. We have a great first start with the go-live, and now from here it's how do we take advantage of it? Now that we've built a relationship with Nordic, and as we decide, and we try to form what the future looks like, I mean, we're pivoting if you think about it. We've been at this build and this implementation for two years. Getting us here is not what's going to get us there.

The idea of partnering with Nordic and bringing their expertise forward, we think that there's a good fit for optimization in the future. Whether that's a large project where we'll have to do project management or spot augmentation or probably, more importantly, just some advice. The fact that when we bring up ideas, they're quick to say, OK, here's an idea, or here's an experience. They absolutely have more experience in an Epic environment than we do. If you think about it, we're only three weeks in. We have three weeks experience in an Epic environment where Nordic advisors brings a wealth of expertise. Either an advisory role or direct hands on, we're looking forward to a much longer relationship.

An enterprise roadmap to data conversions

A data strategy is an essential part to your organization’s growth, whether through mergers, acquisitions, affiliations, or joint partnerships....

Near, far, [project] manage wherever you are

With 2020 behind us, I suspect that many years from now, I will still remember this as the year I was excited to see toilet paper or disinfecting...

Remote relationships: How to build trust during strategic engagements

At this point, we all know that these are unprecedented times, a phrase we’re all ready to politely show the door. However, what we are still working...