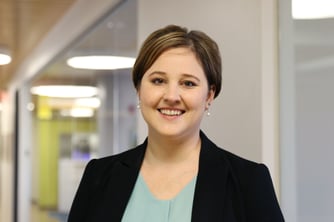 First impressions are almost troublingly important. Research shows that we make judgments about trustworthiness, competence, and likeability within a fraction of a second of meeting someone – often before they even have the chance to speak.

For consultants, whose success hinges on building good relationships quickly, this insight may be more nerve-racking than it is useful. But luckily, there are a few ways to start building trust and establishing credibility as soon as you set foot on-site. We sat down with Senior Consultant Jes Adams to talk through her tips for hitting the ground running with a new contract.

In the few days before you start on-site, Jes recommends doing a quick Google search to see if any “new news” has hit about the organization since you interviewed.

You don’t need to be an expert on the organization before you start, but you also don’t want to walk into a hospital that just announced an acquisition, layoffs, or major personnel changes without knowing it.

2. Meet the people you’re going to be working with.

If you don’t already have time set up with your manager, make sure to put time on their calendar for a meeting or an informal conversation, Jes says.

“Sometimes they’ll have suggested reading for you to jump into, especially if you’re starting a management-type role like a project manager,” she says.

She also advises setting up time with other consultants, even if they’re not in the same role or area as you. They’ll likely have some inside information on the culture and politics of the client, and you can pick their brains for “what they wish they’d known” before they started on-site.

“Before my first day, I try to meet with the consulting lead on site via a phone call or an email,” Jes says. “They will often give you small but important details – like telling you that the building you were instructed to go to isn’t actually the right building. You’d be surprised what you can learn just by checking in.

It’s also a good idea to set clear expectations with your new manager and team from the get-go. Rather than waiting for the client to define expectations, set up a meeting to define “what success looks like” at the beginning of your contract. That way, you’ll be able to measure your performance against your original goals as the contract progresses.

Jes says one of the most common mistakes consultants make is not taking time to observe the dynamics of their new environment in the first few days.

“Try to get into as many meetings as possible, and observe what’s going on,” she says. “Acting like a sponge for the first few days is the most helpful thing I’ve done when I start a contract.”

When you’re sitting in meetings, she recommends watching for the following things:

Observing people’s behavior will give you an idea for how to interact with them professionally. Jes says that often, the people who stay quiet but take notes “end up being the biggest players in the organization.”

4. Make sure you know what your role is.

“During the interview process, you should have gained a basic understanding of why you’re being brought in,” Jes says. “If you’re not intended to be a disruptive force, you can make a bad impression by stepping on people’s toes and acting like a bull in a china shop.”

5. Ask questions before you make suggestions.

We’ve all worked with a new employee who puts forth a million ideas without taking the time to understand why the current system exists. As a new consultant, Jes says, it’s likely you’ll notice inefficiencies, outdated processes, or workflows that you think could be improved.

While you’re new, she recommends digging into the “why” of a situation before you recommend a solution. You could say: “I was in this meeting, and they were talking about this process. Could you tell me a little bit more about why it’s done that way?”

Once you have an explanation, you can decide whether to proceed with a suggestion, which she also recommends phrasing as a question.

“You can say, ‘Have you ever thought about doing [XYZ]?” she says. “That way, you’re deepening your understanding of their work without making someone defensive.”

6. Trust your experience and be ready to jump in.

While it’s important to take some time to absorb and digest, Jes also says you should trust your experience and be ready to do your job. Whatever it takes to fill your knowledge gaps, she says you should throw yourself into it wholeheartedly.

“We’re brought into this position without a lot of knowledge, and nobody is going to hand it to you,” she says. “You have to reach out and take it for yourself.”

This often means that you have to disrupt other people’s work lives to ask questions and get the necessary background. First, make sure that you’ve exhausted other ways of answering the question, such as looking on the organization’s internal SharePoint and searching existing documents. Once you’re sure the answer isn’t right in front of you, go to your colleague and ask a specific, targeted question.

Remember that you’ve been hired because you’re experienced and knowledgeable, and trust your gut to do a great job.

“You’re in this job because you’re good at what you do,” Jes says. “You don’t have to flaunt it, but remember this isn’t your first time touching the system.”

Reflections on healthcare IT consulting in the midst of COVID-19

We’ve been social distancing and taking other COVID-19 precautions for over four months now. As cases continue to rise nationally and hospitals once...

As organizations have increasingly taken advantage of technology that allows for more remote work and virtual care, they have also increased the...

Nordic’s maxims are the foundation of how we work with each other and our client partners. In the spirit of the maxim Grow. Teach., Nordic has...