Everything old is new again

There are many ways to describe the concept that humans seem to be reliving the same problems with the same bad solutions over and over. Jonathan Swift (or maybe it was Winston Churchill or perhaps Mark Twain) said that “everything old is new again.” Writer and philosopher George Santayana wrote that “those who cannot remember the past are condemned to repeat it.” Even higher powers have gotten in on the fun: “What has been will be again, what has been done will be done again; there is nothing new under the sun.” This concept that we must learn to resolve the same issues repeatedly hit home for me when I was reading an editorial in the Journal of the American Medical Association (JAMA).

Dr. Abigail Zuger is an experienced infectious disease physician in New York and an accomplished author. In the latest edition of JAMA, she compares the AIDS epidemic of the 1990s to the COVID-19 pandemic that we’re dealing with today. She writes that “AIDS back then was an ultramarathon; COVID is more a series of exhausting sprints. Even so, history is repeating itself in an uncanny fashion as clinicians struggle once again to convince patients to save their own lives.”

This statement was shocking to me. Although I was just starting medical school during the AIDS crisis, I thought I knew a good amount about the etiology and epidemiology of the disease. It turns out that I knew quite little. Dr. Zuger educated me though! She tells the story of a moment in 1996 when anti-retroviral medications became clear life savers to those with AIDS. While those who took the medications thrived, many refused the life-saving pills.

The infectious disease expert writes of the people who didn’t want the meds:

The AIDS drugs were poisons, unnatural, and toxic, they said. The drugs were still experimental—so thanks, but no thanks! The drugs were for sick, dying people, not vigorous people like them. (They were going to beat this thing!) A brother had taken the meds and died. A neighbor developed intractable pain. They'd prefer to try dietary modification first. The drugs were the newest bioweapons in the government's war against its own citizenry. AIDS itself was a myth created specifically to ensure these very drugs would infiltrate and destroy entire communities.

Does this eerily remind you of some folks today who eschew public health recommendations like vaccination, masking, and crowd avoidance? Do you too notice the similarities between a sibling who did poorly after taking anti-retrovirals and someone’s cousin who was vaccinated against COVID-19 and then…did poorly? Once again, old is new again, indeed. 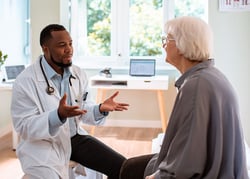 Dr. Zuger notes that there is plenty of blame to go around. From the physician standpoint, she rightly notes that modern medicine often portrays itself as safe, effective, and fool proof.  Hence, when recommendations change and rare but real side effects occur, people question the source of the information. Further, she writes that it’s naturally difficult to get humans to understand the need for prevention and planning for a future that may never come. Our cognitive biases, developed over millennia, push us to focus on what’s in front of us today, not what might be there tomorrow. To stand a chance at communicating risk, we need alternatives to sterile facts and figures. “Instead of dealing in principles, lecturing patients on the data and the numbers, perhaps [physicians] should concentrate on stories instead.” We learn by stories, and we clinicians need to do a better job of communicating stories on top of statistics and data points.

In addition to setting impossibly high standards and not communicating as effectively as possible, the good doctor points out that in America, we are all victims of the system that surrounds us. She writes that “patients in the United States have long been forced to fend for themselves in an increasingly brutal medical marketplace, weighing hospitals, doctors, and insurers exactly as they might poke avocados or test-drive SUVs.” Ouch. It’s true, and it hurts. When we create an adversarial system pitting doctor against insurer against patient, it would be odd if we all trusted what the other party was telling us was in our best interest.

How can we move forward? While it won’t be easy, we should consider applying the principles of usability on a macro and micro level to help us arrive at a better healthcare system that can more effectively deal with the next pandemic. While all countries are beset with problems like those in the U.S., we’ve managed to take ours to extremes. A more usable healthcare system would set expectations appropriately, communicate clearly using methods and words that meet the patients where they are, and create aligned incentives for all parties (physician, patient, and payer) to move in the direction of greatest good for both the individual and the population as a whole. Humans respond to stories, and we need more of those. Technology should help clinicians tell stories about and to the patients for whom they care by leveraging dashboards and data that focus more on graphical interfaces and less on copious volumes of data.